9 Ways to Wear Sneakers With Dresses

10 NYC-Girl Outfits That Were Inspired By L.A. Girls

When you think “Chippendales,” murder is probably pretty far down the list of words that comes to mind. The knowingly cheesy Las Vegas-based dance troupe has long been the biggest game in town when it comes to male stripping (although Magic Mike gives them a run for their money today), but while these well-oiled hunks are in famous, the troupe’s bloody origin story is much less widely known.

That’s all about to change thanks to Welcome to Chippendales, a new Hulu series from Pam & Tommy creator Robert Siegel, which chronicles the wild and violent history of the Chippendales and its founder, Somen “Steve” Banerjee (Kumail Nanjiani). The show is based on the 2014 nonfiction book Deadly Dance: The Chippendales Murders, by K. Scot Macdonald and Patrick MontesDeOca, and as such, most of its seemingly outlandish twists are actually taken straight from real life. 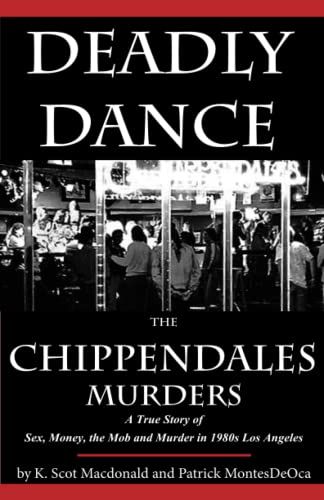 In fact, even the star of the show felt that way. “One of the first conversations I had with Robert Siegel, our creator, he told me he had the eight episode breakdown,” Nanjiani recalled in an interview with E! News. “I kept stopping him to be like, ‘Did that really happen?’ He was like, ‘Yeah, this is all real.’”

Here’s a few key things to know about that wild real story.

Chippendales started as a desperate bid to save a failing business.

Back in the 1970s, Banerjee was running a struggling Los Angeles club called Round Robin, trying to figure out how to make his joint stand out from the rest. An ambitious immigrant from India, Banerjee had long harbored a dream of building his own business empire, and ​after running several other types of business (including a gas station and a backgammon club) he felt his time was running out. He had to make this work.

First, he tried turning the place into a disco named Destiny II. When that failed to bring in the crowds, Banerjee had another idea, one that would really make his club stand out: male strippers. Accounts vary as to where this idea came from; some say it was stolen from an existing club in Redondo Beach; others say it came from club promoter Paul Snider.

“Paul Snider had seen some gay male review and thought it would be kind of like hammy and fun to do this for women,” history professor Natalia Petrzela told Vice. “And he brought the idea to Banerjee and that’s how it began.”

Chippendales was a hit from day one—and yes, it really was named after the furniture.

Banerjee conceived of the show as campy, but classy, with the strippers wearing cuffs and bow ties. He named the show after the Chippendale furniture style, which has its roots in the 18th century—reportedly, this was because the club was adorned with a lot of Chippendale style pieces.

In the lead-up to the show’s launch, Banerjee plastered attention-grabbing fliers all over L.A., reading (per Vice): “Chippendales presents MALE EXOTIC DANCERS! Ladies Only will be admitted during this show.”

And as it turned out, there was a gap in the market for male strip shows targeted at straight women. According to The New York Post, there were “lines around the block” as soon as the show opened, and Chippendales became the empire that Banerjee had always dreamed of. He also proved to be a natural at marketing, framing the show as pro-feminist. He told the Los Angeles Times (per All That’s Interesting) that Chippendales was “enhancing the cause of women’s lib, by providing a place where women can go and look at men.”

Within a couple of years, Banerjee was expanding his horizons, opening clubs in New York, Dallas, and Denver, and launching a touring troupe that performed worldwide. In the early 1980s, he hired Nick De Noia, an Emmy-winning TV producer who he hoped could help him navigate the expanding business. (De Noia is played in the series by Murray Bartlett). 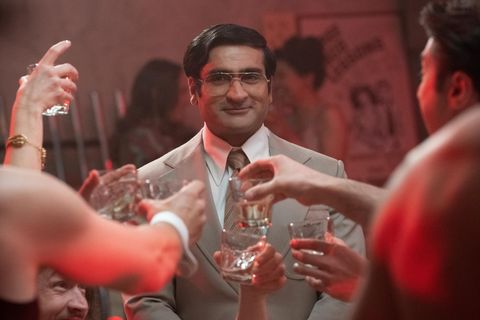 Kumail Nanjiani as Steve Banerjee in Welcome to Chippendales.

Banerjee and De Noia’s partnership was lucrative, but fraught.

And here’s where things start to go south, psychologically speaking. Banerjee and De Noia apparently butted heads from the start—per The New York Post, they were “like oil and water” personality-wise. Both men wanted control of the company—and De Noia soon made Banerjee an offer.

On its surface, it seemed reasonable: De Noia would develop and launch an east coast Chippendales show based in New York, and keep 50 percent of the revenue. But there was a caveat to the deal, which Banerjee apparently failed to grasp.

“Nick wrote on a napkin that he has the right to take Chippendales on the road and own it in perpetuity,” original Chippendales member and host Dan Peterson says on the podcast Welcome to Your Fantasy (which is essential listening if you’re looking to delve deeper into this saga). And Banerjee agreed—but only because he didn’t understand what he was signing away. As Peterson explains: “Steve signed it and [gave] away the most profitable part of the business because he did not know what perpetuity meant.”

Banerjee ultimately hired a hit man to take out his business partner.

Over the next few years, Banerjee became more and more enraged as he watched De Noia take all the credit (and 50 percent of the revenue) from Chippendales’ growing nationwide success. According to ABC News, he also began to doubt that De Noia was paying him his fair share of the touring profits.

Finally, Banerjee enlisted a Bronx-born friend, Ray Colon, to organize a hit on De Noia. He apparently did this because he wrongly assumed that Colon had connections to the mob. “He fit the stereotype of a Mafia soldier,” explained K. Scot Macdonald, who co-authored the book that Welcome to Chippendales is based on. “He was intense.”

In lieu of any mafia connections, Colon recruited an accomplice named Gilberto Rivera Lopez to help him take out De Noia.

On April 7, 1987, Colon and Rivera Lopez flew from Los Angeles to New York. ABC News, they visited the Chippendales east coast HQ in NYC, found De Noia in his office, and shot him dead.

Both assassins fled before the police arrived, and the case remained unsolved for years. And since there was nothing to link Banerjee to the crime at all (at the time), it seemed to him that he’d gotten away with murder. So why not do it again? 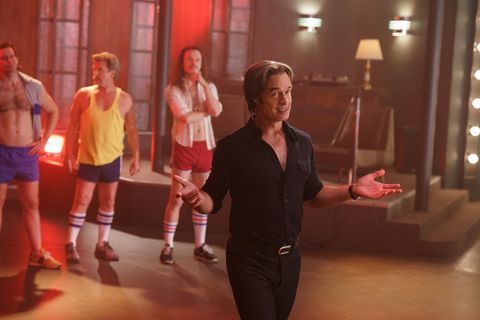 Banerjee began trying to take out hits on all his competitors.

Doing the 1990s, Banerjee (via Colon) tried to take out a hit on a group of employees at Adonis, a successful male strip club in London. The club had been started by former Chippendales performers, and Banerjee resented what he saw as their disloyalty.

“They were directly now competing with Chippendales,” FBI special agent Scott Garriola told ABC News. “So what would you expect Banerjee to do when he has a competition? He wanted these people killed.”

Colon ended up getting ratted out by the man he’d tried to hire to carry out the hit in London. In 1991, he was arrested by the FBI, charged with conspiracy and murder for hire. He ultimately cooperated with the feds, and told them that Banerjee was behind not only the Adonis scheme, but also the murder of Nick De Noia.

After an unsuccessful sting operation, the FBI were finally able to get a confession out of Banerjee by having Colon meet up with him at a hotel room in Switzerland. Agents from the bureau were in the next room, recording their conversation as Banerjee talked about plotting the murders, and giving Colon the money to buy the gun that he used to kill De Noia.

Banerjee was finally arrested in September of 1993, and pleaded guilty to racketeering and murder for hire charges. But the day before he was due to be sentenced, he died by suicide.

“He didn’t get the punishment he deserved. He didn’t serve the time for Nick DeNoia, for destroying lives, for trying to kill people,” former Chippendales performer Read Scot told ABC News. “He got out easy. He was a coward.”

Watch Welcome to Chippendales on Hulu

Emma Dibdin is a freelance writer based in Los Angeles who writes about culture, mental health, and true crime. She loves owls, hates cilantro, and can find the queer subtext in literally anything.

Lucy’s Legacy: Celebrating the 48th Anniversary of Her Discovery with a Selfie | Smithsonian Voices

9 Ways to Wear Sneakers With Dresses

10 NYC-Girl Outfits That Were Inspired By L.A. Girls

Biden on China balloon: ‘We’re going to take care of…

How end of Netflix password sharing will change the way…

I raised 2 successful CEOs and a doctor. Here’s my biggest…